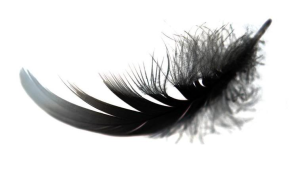 Today my heart storms,
my life bound and counter-bound.
One black feather, a gift
in the wind, peace — but I know
I’ve no haven; I made my chains.

I wish I could be
your shelter of wings, freedom.
Today my heart pounds
against the chains you have made.
I am black feathers, falling.

The somonka is a Japanese form. In fact, it’s basically two tankas written as two love letters to each other (one tanka per love letter). This form usually demands two authors, but it is possible to have a poet take on two personas. A refresher on the tanka: If a haiku is usually (mistakenly) thought of as a 3-line, 5-7-5 syllable poem, then the tanka would be a 5-line, 5-7-5-7-7 syllable poem. However, as with haiku, it’s better to think of a tanka as a 5-line poem with 3 short lines (lines 2, 4, 5) and 2 very short lines (lines 1 and 3). While imagery is still important in tanka, the form is a little more conversational than haiku at times. It also allows for the use of poetic devices such as metaphor and personification (2 big haiku no-no’s). Like haiku, tanka is a Japanese poetic form. (for more on the tanka, see: http://www.writersdigest.com/editor-blogs/poetic-asides/poetic-forms/tanka-bigger-and-more-relaxed-than-a-haiku for more on the somonka: http://www.writersdigest.com/whats-new/somonka-poetic-forms)